Kilmarnock, East Ayrshire’s principal town, has suffered its share of setbacks. The closure of the Johnnie Walker bottling plant in 2012 will be the latest in a series of high-profile closures over the last 40 years, including Stoddart Carpets, Saxone and Massey-Ferguson.

But Diageo’s departure is also an opportunity to think to the future: to plan not only how the extensive site occupied by the bottling plant can best contribute to the town’s resurgence, but how the wider town should prepare itself for the future.

Make it Kilmarnock, a partnership chaired by East Ayrshire Council, has the job of turning the town around. One of their initiatives was to commission an “Integrated
Urban Development Plan” – a plan that would set out a clear vision for Kilmarnock, regenerating the town centre, improving the streets, buildings and spaces, and developed with the local community.

building on the positives 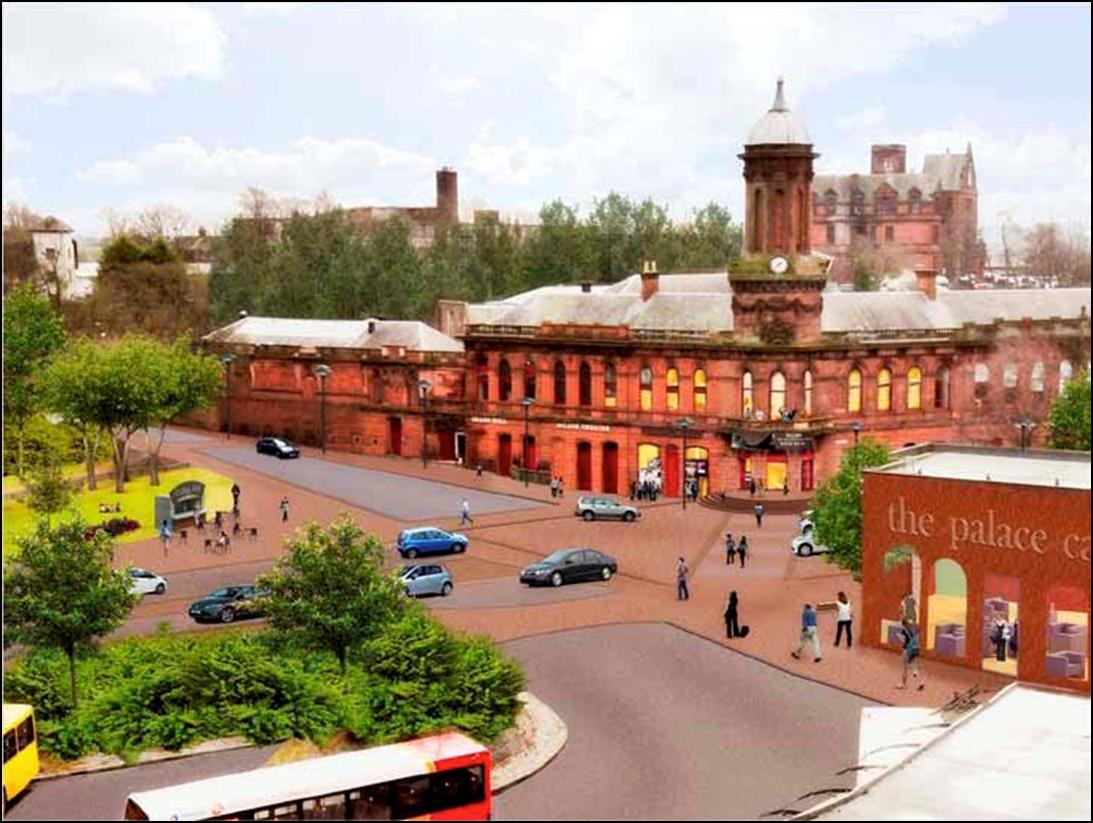 With many assets to its name, Kilmarnock is a justifiably proud town. The grand vista of John Finnie Street, as fine a street as in any Scottish town, and the intimate character of Bank Street; a string of fine parkland through Howard Park, Kay Park and Dean Park; and the cultural assets of the Dick Institute and the Palace Theatre, to name but a handful. Wedded to these physical assets is another less tangible, but no less important, asset: the pride, spirit and energy of the people of Kilmarnock.

Beginning in late 2010, preparation of the plan took place at a time of deep economic uncertainty. The country had been in the grip of a severe economic downturn since 2008. Property development remained sluggish. Public spending is being cut, a trend which is almost certain to continue in the short to medium term. In summary, the immediate context is characterised by uncertainty and difficulty in securing investment – not an easy backdrop for thinking how to use development to turn a town around.

We quickly recognised that the vision and proposals put forward in the report must respond realistically and sensitively to that context. We knew that it iis important to set aspirations as long term goals; but it is equally critical to be aware of the likely difficulty of capturing significant investments in the short term. The study also, therefore, focuses on the potential transformative impact of lots of small scale actions – many of which are already happening in the town, such as social enterprises providing arts opportunities for young people and the Council working with landlords to bring historic buildings back into use.

The focus of our brief was on physical and spatial change. But during the course of the work, particularly through extensive discussions with local schools, residents and businesses, it became clear that the benefits of physical change would be greatly enhanced through supporting economic and social change. Our proposals therefore aimed to integrate economic and social action with physical interventions – placing as much emphasis on, for example, fixing corrosive drug-related anti-social problems in the town centre as breaking down the barrier effect of the one-way system and redeveloping gap sites. To a member of the public this might sound an obvious thing to do, but it is still all too rare for different professions and sectors to connect up with each other.

The Council is also working to bring the study into the statutory planning system by integrating it into the forthcoming Local Development Plan – for the same reason of linking up actions across different sectors. Again, this might sound obvious, but the planning system usually sits apart from wider initiatives like this, not least due to the difficulty of fitting non-physical proposals (like crime and community development) into the straitjacket of statutory planning.

how we prepared the plan

The process of preparing this plan was simple, comprising two phases.

The first phase involved speaking with a wide cross-section of people in Kilmarnock to understand their aspirations and concerns. We made contact with over 450 people from businesses, schools, neighbourhoods, shoppers, visitors, youth groups, public agencies and social enterprises. Some people gave us their thoughts in a short conversation on a street corner; others took part in in-depth workshop discussions. Taken together, these conversations provided a wealth of information from different perspectives about how the town centre, particularly, works and doesn’t work. It also allowed us to understand people’s concerns about the town, and their aspirations for its future. We are grateful to all those who gave so freely of their time to contribute.

In parallel with those discussions, the study team looked at the town’s economy and physical environment, and took time to understand the wide range of other initiatives happening in the town.

The second phase was to develop a response to those issues, challenges and aspirations, taking care to ensure that the plan was rooted directly in the issues and aspirations that we had heard from people. How should the town, and particularly the town centre, be planned in the future so that it can become more lively, attractive, healthy and sustainable? Although this question was being considered right from the start of the study – not by the study team in isolation, but in their conversations with people in Kilmarnock – the second phase saw a focus on developing a coherent vision and proposals to answer this question. The draft proposals were tested in two workshops in early March 2011, to participants were invited from public agencies, businesses and community groups.

The proposals that make up the plan are split into three groups:

big interventions like a shift in planning policy to favour the town centre more strongly, breaking down the one-way system, fixing anti-social behavioural problems in the town’s core, re-integrating the Diageo site into surrounding neighbourhoods, and developing a branding/marketing strategy

conserving assets like making more of the blue-green network of river and parks, an extended events programme in the town centre, basic cleanliness and building maintenance, and continued investment in bring historic buildings back into re-use

making it tick: including localised rates relief, a focus on learning and education, and an annual collaborative Kilmarnock futures forum to monitor progress and guide future change

The plan is now publicly available from the Make it Kilmarnock website. It will be considered formally by the Council later in the year, and then the hard work of implementing the proposals will begin.

Successfully implementing the plan will depend on collaborative action from the public, private and voluntary sectors in the town. The Council alone cannot turn Kilmarnock around. But acting as a guide for everyone to pull in the same direction, the plan can create the conditions to support private and social enterprise in the town, attract more expenditure and investment, and ultimately create a more positive story for Kilmarnock.

from starchitects to localism | a new political dawn
crianlarich into action