By Nick Wright on 21 February 2019 in culture change, planning, projects

Community Land Scotland‘sPolicy Director Calum MacLeod has just published an excellent brief overview of what Scottish land reform has achieved since the 2003 Land Reform Act (thanks to the Scottish Community Alliance).

As Calum succinctly explains, much has been achieved since 2003 – but more needs to be done to spread the benefits of community land ownership beyond its Highlands and Islands heartland.

Statistics show, for example, that over 500,000 acres are in community ownership in the Highlands and Islands, but less than 1,000 acres in the South of Scotland.

Will the Scottish Government’s proposed new South of Scotland enterprise agency follow the successful example of sister agency HIE, and set up a Community Asset Unit to support community ownership?

An important role for planning

There’s an important role for planning here too, but it may need a little teasing out.

Community ownership is a key part of achieving the Scottish Government’s wider agendas of community empowerment and rural development and repopulation, as Calum argues. (Community ownership also has an even bigger contribution to tackling urban agendas, I would argue – things like vacant and derelict land, health and well-being, jobs and vibrant communities. But let’s leave that for now.) It’s pretty well-established now that community-based approaches to creating better communities are every bit as valid as more traditional public and private sector led regeneration.

In the past I’ve written about new approaches to rural planning, offering mechanisms for rural planning policy and decision-making to be more proactive in supporting rural communities and economies, rather than the conventional restrictive approach which often still persists (with notable exceptions). Of course planning has to balance regulation and promotion of development, but the point is exactly that – it must be a balance, not be too restrictive. The point is not to encourage sporadic houses across the countryside, like Ireland in the 1990s, but to facilitate appropriate development in and around rural communities so that they thrive.

I’ve been working in a number of rural locations in recent years, most recently a Community Action Plan for Johnstonebridge in Dumfries and Galloway, which tried to place community action as part of a broader strategy to attract population and sustain the local communities. That plan chimes exactly with the rural agenda that Calum MacLeod describes for community ownership – illustrating exactly how planning can contribute to that agenda. 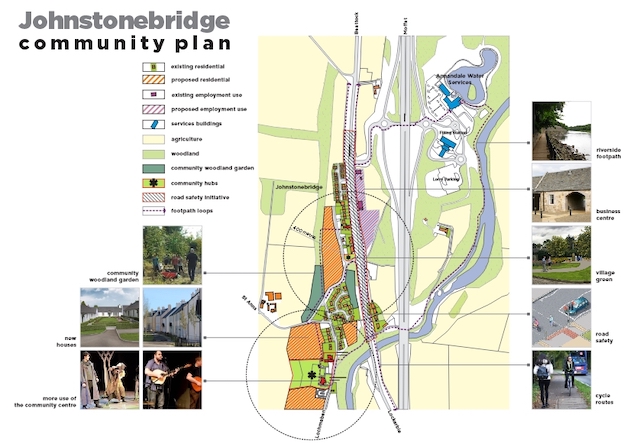 A national blueprint for rural Scotland

But don’t just take my word for it: the National Council of Rural Advisors (established by the Scottish Government) recently published its recommendations to Scottish Ministers for a new blueprint for Scotland’s rural economy. This mportant document emphasised the importance of the rural economy’s strategic importance and concerted action across policy agendas.

Facilitating community-led local development is, unsurprisingly, a cornerstone of the recommendations to Ministers. Planning is noted as having an important role, not least to facilitate “improved and inclusive access to rural housing solutions”.

So, how can planning’s positive contribution to this blueprint for rural Scotland be rolled out across the country?

By happy chance, the Scottish Government’s Planning Division has recently commissioned research to prepare a new generation of national rural planning policy for the next National Planning Framework (NGP4) – with the specific aim of “supporting positive economic futures” in rural areas.

I sincerely hope that the research team, led by property consultants Savills, takes heed of the NCRA recommendations to Ministers and produces a framework for rural planning which supports community-led development and properly integrates with the Scottish Government’s community empowerment agenda. Clear national policy that proactively supports rural development is exactly what’s needed.