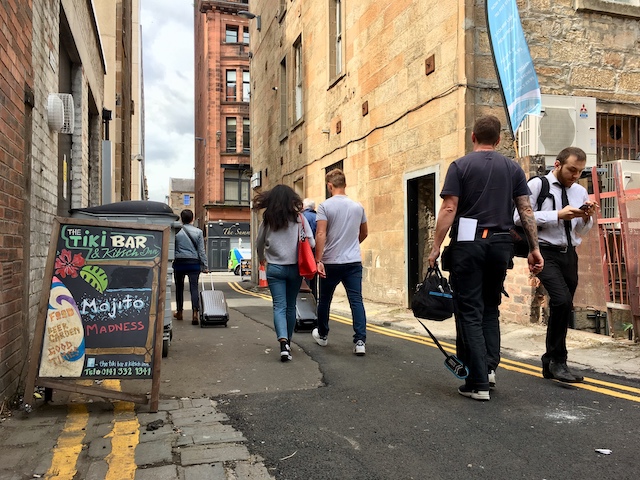 One thing I love about Glasgow city centre is the buzz: people everywhere, events in the street, new places to visit.

In my professional life as an urban planner, I’m really interested in how to help make that buzz even better. Planning is often thought of as a legalistic activity, regulating new development. But it can also be proactive and creative activity. When it comes to making the city centre buzz, a good starting point for me is to work with the folk who make that buzz, to find out what they need to happen to build even more buzz.

I’ve been lucky enough to have worked with the Council’s City Centre Regeneration Team – the dedicated folk who are planning and delivering massive strategic change in the city centre, including the £115m Avenues project – over a number of years to help put that concept into practice. The City Centre Lanes Strategy commissioned by the Council from a team led by WMUD is a good example.  You can read a good summary of the work on the WMUD website here.

The purpose of the work was to work out how to use Glasgow’s city centre lanes to generate more buzz, and what the Council could do to support that.  At the heart of what we did were dozens of conversations with local businesses, residents, artists, community groups and entrepreneurs who wanted to bring life to the lanes, so we could understand what they saw as the potential, what was stopping them, and how to remove those barriers. In short – we didn’t just want to produce a nice-looking strategy, we wanted to stimulate action.

Those conversations led to a strategy and action plan which the Council has moved quickly to act upon. Within months of the Lanes Strategy being finalised, the Council had implemented the single most important action from all those we spoke to: removed unsightly and polluting commercial waste bins from the lanes. At a stroke, rewriting commercial waste and recycling rules removed the single most significant barrier to realising the potential of the city centre’s lanes. This has quickly been followed by a £100,000 City Centre Lanes Activation Fund, the sole purpose of which is to support businesses, residents and artists in developing lanes as attractive and exciting places.

For me, the Lanes Strategy and its implementation is a wonderful example of a local authority working collaboratively with local people and organisations to help them make their environment better. From the outset, the ethos of the Lanes Strategy was to support collaborative action, based on local ideas – inspired by good examples like Melbourne and Montreal, but not trying to impose their solutions in Glasgow. I think that’s wonderful.

Glasgow’s City Centre Regeneration Team are doing lots of other noteworthy project that might not be on your radar.  The High Street Area Strategy, for example, is another excellent example of collaborative working in the city centre.  Behind that rather mundane title lies an exciting vision and action plan for the future, which helps the local community itself bring more life to the area.

These two examples are part of a shift, not just in what the city centre offers (from food and drink to the growth of co-working spaces), but also how the Council manages and supports those changes. For me, working collaboratively and proactively with local businesses, residents, artists and entrepreneurs has to be the way forward. It’s great to see examples of this taking root in the city centre.

This article was first published on the Glasgow City Centre Strategy website on 16 November 2018, and has since been slightly edited.