By Nick Wright on 20 August 2011 in all posts, community engagement, planning, projects 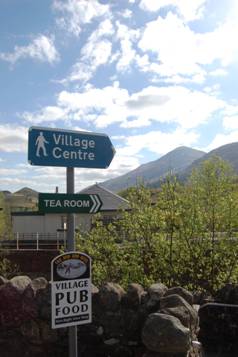 What does Crianlarich make you think of? That little place signposted from miles away, only for you to blink and miss it when you get there? Somewhere to dive into the loo on the way to the West Coast, and then get back on the road again?

Despite having a population of only 200, Crianlarich is a thriving community. It has people young and old, businesses, a school, a railway station and a fire station. It has its fair share of economic and social issues, such as a lack of employment opportunities and a shortage of family housing. It also happens to have a sizeable proportion of residents who commit their time and future to building a better collective future for the community.

In 2010 Crianlarich into Action, an offshoot of Strathfillan Community Council and Strathfillan Development Trust, recently commissioned Viv Collie of Cupar-based VivID (providing support to small businesses and sustainable tourism), Robin Webster of Glasgow-based Cameron Webster Architects and I to prepare a feasibility study into a heritage and culture project in the village. The work rapidly developed into a village plan, which has recently been completed.

The basic aims of the work were to:

encourage more people to stop in Crianlarich, and to spend more time and money there – to boost the local economy and extend the tourist season

provide for local residents as well as visitors

support the local community to lead and facilitate change themselves

In other words, the work was about place-based sustainable local economic growth.

The approach to the work was collaborative and community-based: collaborating with businesses, young people, residents and agencies to work out realistic proposals for the village’s future. At the heart of this was working out, with those people, what makes Crianlarich special – its people and place assets – as the building blocks for future economic growth. What could be closer to the Scottish Government’s objectives for the planning system?

Critical to the success of this approach is securing commitment from a whole mix of people, from individuals and businesses to the Council and the National Park Authority, to make things happening on the ground. This could range from cleaning up eyesores to redesigning road layouts. In that, we were hugely helped by the energy of local residents and businesses.

The village plan itself could, we believe, be incorporated in the next Local Development Plan with minimal adjustment, despite including proposals which are not about land use. Proposals include, for example:

making the river more accessible and visible, including opening up hidden vistas and creating a footpath network

painting houses, reducing clutter and smartening up the village

reducing the dominance of the main roads and traffic

We would argue that these, and the other proposals in the plan, all contribute to a long term vision for Crianlarich: one which is based on improving its ‘place quality’ and putting in place the conditions for sustainable economic growth. The proposals may not all be about land-use, but they are all about making a better place.

The plan also identifies some simple principles to guide future change in the village. These include encouraging local people to develop and run with their own ideas, and supporting and creating opportunities for local enterprise. Research evidence – such as from the Centre for Local Economic Strategies and New Economics Foundation – increasingly shows that these concepts deserve to be more widely supported as fundamental blocks of local economic growth.

The project built on the Strathfillan Community Action Plan, part of the excellent Community Futures programme which has been rolled out across Loch Lomond and the Trossachs National Park and elsewhere in rural Scotland. This pioneering programme of community action planning and community engagement was designed by the Small Town and Rural Development Group (STAR) in 1998.

I believe the approach we used in Crianlarich adds some useful dimensions to the Community Action Plan process:

Illustrating how the place could look in the future once the projects and initiatives are implemented, through plans and visualisations – and so minimising the risk of a wishlist of unrelated projects, and helping everybody to understand what the place would be like in the future.

Prioritising action, from quick wins (which in Crianlarich’s case included repainting buildings, tidying up rubbish and clearing vegetation to open up beautiful views of the river and strath) and early action (such as, in Crianlarich, securing funding for, and implementing, the footpath network and re-equipping the play area for a wider age range and more adventurous play) to longer term objectives (such as street redesign and new housing development in the village core).

Working to broker collaboration and commitment from key players – in the local community and in public agencies – proved an effective way of building momentum to begin implementing the plan even as it was being completed.

For me as a planner, an important lesson was that making Crianlarich sustainable as a place and as a local economy – essential priorities of today’s planning system – is as much about non-spatial, non-physical interventions as it is about conventional land-use planning decisions. Investing in buildings, spaces and land-use can never be enough in itself. Each of us should also consider what else needs to accompany the bricks-and-mortar in order to build enterprising communities.