By Nick Wright on 16 January 2012 in all posts, community engagement, culture change 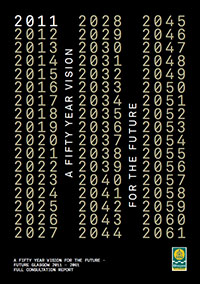 Glasgow City Council has just launched a public consultation on its City Vision for 2061 – its vision to shape the city’s future.

This should be big news. It will shape what kind of city Glasgow will be in the future.

The City Council may have published the vision, but – refreshingly – they are not claiming that it’s their vision. It is based on the aspirations of over 2,700 people in Glasgow, who have told the Council how they think the city should change over the next 50 years. That 2,700 included people from all ages, backgrounds and different parts of the city; politicians from across the political parties; and experts in education, business, environment, transport, culture, housing and other specialist fields.

Speaking to a cross-section of people like that sounds to me like a good way of creating public policy. It’s the people, businesses, organisations and institutions of Glasgow, working together, who will make the future of this city.

It is worth remembering that this is an unusual way of creating an “official” vision for a British city. Developing a city vision based on what people want is not how it is usually done. Normally it is government and business who decide strategic visions like this.

I think that a vision based on people’s views is newsworthy in itself – whatever the content of the vision.

what is the vision?

Of course, the content of the vision is also important. What does Glasgow’s vision say?

It is actually quite difficult to make visions like this stand out from the crowd. But there are a few things in Glasgow’s vision for 2061 which are different:

The vision is quite clear that these changes won’t be achieved if we carry as we are. It says that all of us – the Council, citizens, businesses, third sector, government and the public sector – need to:

These things risk sounding trite. But the truth is that they are fundamental.

If Glasgow is going to become the place described in this vision, all of us need to put these values into action. The Council realises that, which is why they want this to be a shared vision. That’s the only way to banish sectarianism, devolve power to local communities, and avoid people being left behind for lack of opportunity – just a few of the concrete things that the vision contains.

is it your vision too?

There’s far more in the document itself, of course. Check out the summary version or the full version, and then tell the Council what you think.

Most importantly, tell them whether you share this vision.

Nick was part of Glasgow City Council’s core team which led the development of the City Vision during 2011. In particular, he helped Kevin Murray Associates to design and deliver the public engagement that informed the City Vision (report available here; 10mb PDF) and co-authored the City Vision documents. The views expressed above are entirely personal.