By Nick Wright on 15 June 2020 in community engagement, culture change

The original version of this article, jointly authored with Kathie Pollard of the Scottish Land Commission, was published on the Land Commission website on 15 June 2020. This version has been slightly updated. The principle of early public engagement is enshrined in recent major reforms to Scottish planning and land reform policy. The Scottish Government’s Land Rights and Responsibilities Principles tell us what responsible land ownership, use and management should look like, and place great emphasis on how we engage communities in decisions relating to land.

But if early engagement is such a great thing, why isn’t everyone doing it? And why is there still scepticism, across all sectors, about its value?

Steven Tolson and I were commissioned by the Land Commission to investigate the benefits of early engagement in land use decisions, to help identify how best to support the relationship between communities and decision-makers in land use planning to produce better outcomes.

The aim of the research was to get beyond the belief that early engagement is simply “a good thing” to unearth evidence of the benefits that it can create for everyone: developers and landowners as well as communities. By doing that, our intentions were to:

What did we learn?

During early 2020, 44 interviews were undertaken with developers, landowners, consultants and others involved in planning and development. A huge range of developments were discussed in those interviews: large and small, greenfield and brownfield, from inner city to rural, and residential to commercial.

Firstly, participants’ current perceptions of community engagement revealed ten recurring themes, shown below. These suggest that the system we have could work better: 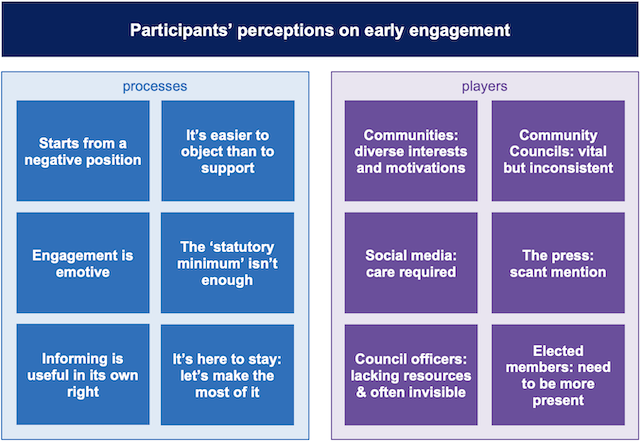 Secondly, when participants described what good engagement looks like from the development industry’s perspective, a number of common characteristics emerged:

Whilst not every developer or landowner does all of these things, taken together they show a good understanding of good engagement in line with the National Standards for Community Engagement and PAS SP=EED guidance on community engagement in planning.

Thirdly, we asked developers, landowners and their agents about the value and benefits of early public engagement. The results were fascinating. Across the board, eight common benefits emerged:

The full report contains lots of quotes and case studies with rich detail about the value of engagement.

Many of those interviewed believed that early engagement was valuable for any development proposal, not only the “Major” planning applications which currently require Pre-Application Consultation – for example:

“We now seek to engage on smaller projects – for example, a proposal for 10 dwellings which, following community engagement, ended with local support for a consent for 30 dwellings.”

There were mixed views on whether early engagement shortened the planning process, but consensus that it reduced the risk of delay later in the process:

“Engagement does not shorten the process but it allows the community to raise issues that we can hopefully address as part of the design process… The loss of time is not really seen as a risk as the exercise is run as a parallel element of the design and development process.”

… and helped developers to communicate and build trust:

“If we hadn’t done the engagement, it would have been harder to get our point across. For a big complex scheme that needs to be explained, like this one, this was very important. I suspect the outcome would have been worse. The planning process would have taken a lot longer.”

The research also generated valuable information from developers about the financial costs of engagement, which is contained in the full report. For example :

“It costs less to engage more. The costs of engaging badly are enormous, they tend to be overwhelming. An angry community, politicians are upset, already paid for the land, can’t get the consent. So it’s partly risk mitigation to manage the process well – good business sense, if you like. But it will also create better places through a more involving process.”

Overall, the study revealed plenty of good examples of early engagement in the development process, and credible evidence of its value and benefits.

The new Planning Act and ongoing land reform are an opportunity to make good engagement by developers the norm, by putting in place secondary legislation and guidance which create a collaborative framework for early engagement. The final chapters of the full report set out a practical, positive and deliverable framework for this to happen, the main points of which are:

Supporting better and more collaborative early engagement is not about subsidising the development industry: it is about developers, local authorities and the Scottish Government working together with local communities to deliver established public policy objectives – homes, jobs, infrastructure, healthy communities, community empowerment, land reform and so on.

“If we’re talking about making the consultation more relevant and less of a box-ticking exercise, and if there’s guidance going to come out on that, then I don’t think you’re going to get much resistance from the housebuilding sector.”

The findings have important lessons that cut across sectors. The Land Commission intends to build on these recommendations through its Good Practice programme and the wider work to reforming the housing and development land market so that it delivers better outcomes across all of Scotland.

The full report contains far more detail plus eleven case studies, a summary of how communities can engage in the planning system, currently available advice and guidance, and a policy and literature review. A shorter summary version is also available.

For more information and resources about the Land Commission’s work on early engagement, click here.

The Improvement Service’s Planning Skills programme recorded a webinar and presentation of the findings on Wednesday 17 June.  The video recording is available on Youtube and a post-event summary of questions, responses and further resources can be downloaded here.