By Nick Wright on 28 November 2018 in community engagement, planning, projects

The annual Scottish Quality in Planning Awards took place last Wednesday night in Edinburgh.  If you’re interested in seeing the 20-plus awards that illustrate the best of Scottish planning in 2018, you’ll need to do some digging. The relevant Scottish Government webpage refers to just three of the awards; the interactive map linked to from that page then has both the shortlisted and winning entries.  Alternatively go to @ScotGovPlanning Twitter feed for November 21st 2018, where there is a series of tweets from the award ceremony.

Congratulations to everybody involved in every award, not least Glasgow City Council for their Overall Award.  Planning is a collaborative activity, and behind each award is a team of people from all sorts of disciplines.  The role of the planner isn’t always obvious: we’re as likely to be negotiating, mediating and brokering to “make things happen” as to be drawing plans or being in charge of the project.  But without the planner to make the project happen, there might not have been a project.

The question for me is: how many of these awards represent the cutting edge of planning? And how many simply demonstrate good practice, that we should all be doing anyway?

Let me try to answer that question by giving some insight into two of this year’s awards that I’ve been involved with.

The Buchanan South Rural Development Framework relating to the beautiful countryside between Drymen and Balmaha, alongside Loch Lomond and only 45 minutes drive from Glasgow city centre, with all the challenges that location brings. 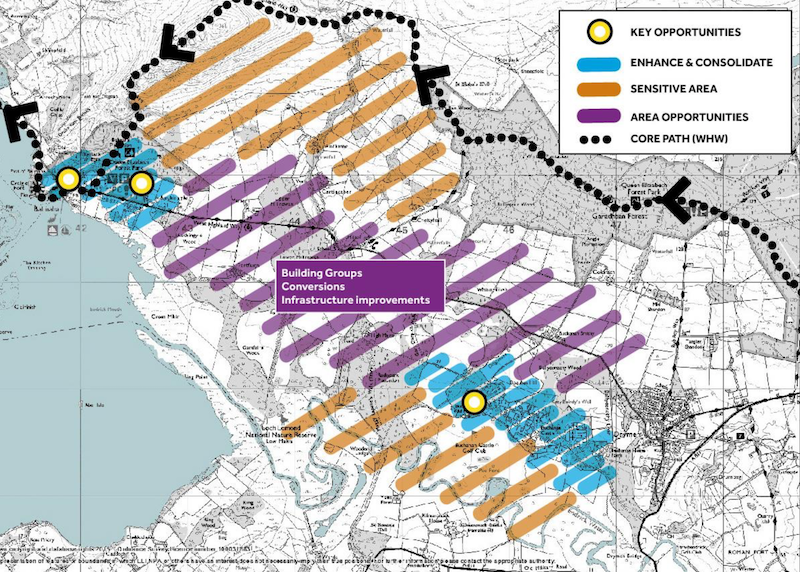 The guidance was prepared by a team of planners and designers from the National Park authority, 7N Architects and me.  We worked together to engage local residents and businesses, including a couple of events where we publicly worked through the challenge of how to accommodate new development in a beautiful and sensitive location. As a team, we then drew up planning policy, including design guidance, to navigate through that challenge – guidance which has been used to steer new affordable housing developments in Balmaha, for example. 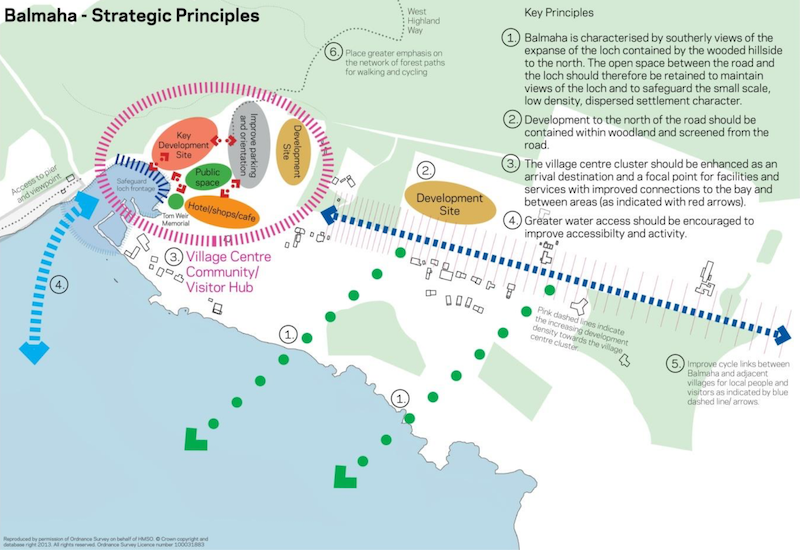 What did the award judges think was worthy of an award about the project? Here’s the award citation from the Scottish Government:

The Judges felt this was a simple but innovative approach to ‘getting development moving’. In particular, there was a great sense that the Council’s [sic] forward thinking approach had given the community both comfort and certainty. In turn, this helped instil confidence in developers – spanning business and housing projects. The Judges were also impressed with how the Council [sic] had engaged with the community in a structured way and had also tried to ensure that the Framework was founded on a strong place-based approach.

These were exactly the objectives that the Park authority had hoped to achieve when the work began in 2014, so it’s good to see that they were apparent to the judges 4 years later.

I think the process was a good example of a planning authority engaging openly and honestly with a local community about a challenging and sensitive issue – taking the bull by the horns, as it were, to explain the issues confronting the very future of that community, and helping residents and businesses to think through how to tackle it in a sustainable and long term manner.

Everyone knows Byres Road, don’t they? Well, for those of you who don’t, it’s a bustling street in Glasgow’s West End, full of cafes, shops, people and vehicles.  The University of Glasgow and it’s 20,000+ students and staff are within a stone’s throw and, despite the rise of Finnieston in the last decade, Byres Road is probably still the heart of the West End.

Vinicombe Street meets Byres Road opposite Waitrose.  The junction was stopped up to traffic many years ago, leaving the bottom of Vinicombe Street itself as a barren tarmac space with a couple of car parking spaces and some businesses fronting onto it, as the photo shows:

The purpose of the project was quite simply to redesign the street to make the public space work better for the local community.

Interestingly, the project was initiated not by the City Council, but by Byres Road Improvement Group – a voluntary group of local organisations, chaired by a local Community Council chairperson in her spare time.  That means the project is a very rare thing – a truly community-led street redesign project which the Council’s planning department then decided to support and help to make happen. Maybe that alone make it worth an award.

The project also stands out, in my mind, because of the way that it was designed.  The design team – Benton Scott-Simmons, WMUD and me – asked local businesses and residents how they would like to animate the street.  That’s not Trumpian populism; it’s because those are the very people who will animate and bring life to the public space that’s being created, so of course it makes sense to involve them in the design.

Those discussions led to a very simple, flexible and elegant space which is designed to accommodate lots of different activities. That might include big annual events like the West End Festival, or the summer “village green” organised last summer (see photo below), or any number of smaller popup events like dog shows or music afternoons organised by residents and local businesses. 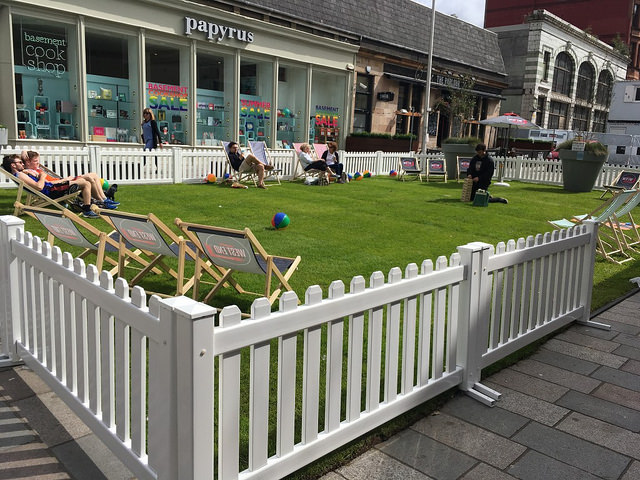 What did the award judges think was worthy of an award about the project? Here’s the award citation from the Scottish Government:

This project quite simply stemmed from a ‘series of community conversations’ supported by Glasgow City Council. Through channelling ideas with the local neighbourhood trust was built which resulted in ‘people believing in consultation’. The public realm project has created a new space for gatherings and has helped to encourage more change and activities to take place in the area. The Judges welcomed all the good things that were happening.

That’s all true, but there’s been one aspect which hasn’t worked so well.  For us as the design team, the icing on the cake would have been the emergence of a community-led group to maintain the planting and programme appropriate use of the space, in line with residents’ desire that the space is not used simply as a late night drinking area.  We tried hard to set that up.  A number of residents with an interest in gardening did come together for a while to water the trees and plants.  But sustainability has proved a challenge, and we’re still hoping that a year-round events programme for the space will be developed. 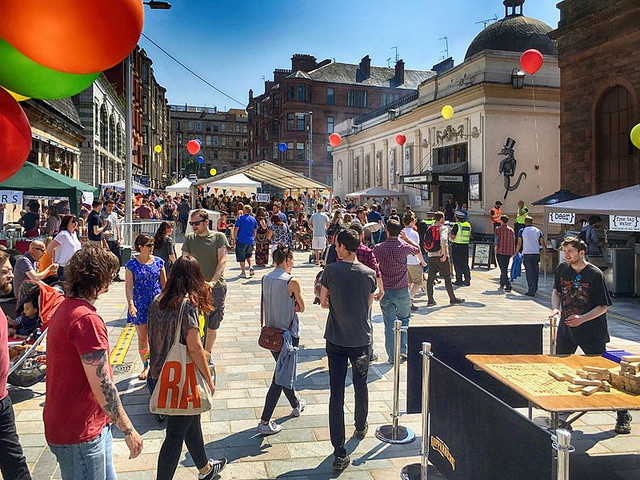 One major success of the project, not mentioned in the award citation, was that the redesign acted as a pilot to stimulate a much bigger £9m scheme along the full length of Byres Road, which has City Deal funding and is now almost ready to start on site.  It just proves that starting small can lead to something big.

So, do last week’s awards represent the cutting edge of where planning should be – or simply reflect current good practice?